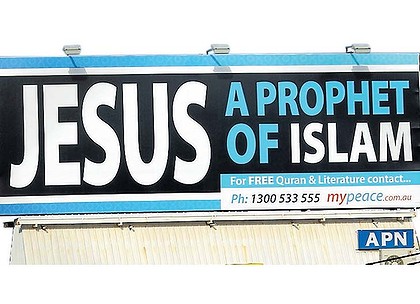 I don’t think I’ve ever seen this in Australia. Muslims are advertising on billboards directly aimed at countering the claim of the central message of the Christian faith.

The billboard claims that Jesus a prophet of Islam. According to their website its just the start of the media blitz and more outdoor advertising is planned on buses. (For the record, I obviously disagree with the billboard’s message)

Check out the story in the Sydney Morning Herald and the Christian denomination leaders reactions. I’m not sure how much this billboard cost but it has picked up a whole stack of free media in a city of 4 million people.

What marketing or advertising lessons do you think churches can learn from the campaign?

Sign up to receive my blog posts via e-mail and get a FREE copy of my e-book ‘Your Digital Makeover’ - A step by step checklist to take your digital strategy to a new level.